You guys know I'm not a huge Romantic Comedy fan. In fact, what I would really like to do is write a blog defining the Romantic Comedy. If I were to do that, some of my favorites would end up being Waitress, Eternal Sunshine, Garden State, and Lars and the Real Girl. But in honor of Valentine's Day, I submit to Cupid, Venus, Eros, and Hallmark to bring you my favorite Rom Coms. Enjoy this, it won't happen often!

1. While You Were Sleeping- This is my mom's favorite movie, so maybe it's her influence, but it's seriously a great movie. Sandra Bullock is adorable, and the side characters, in this case, the family, are perfect. Side characters are usually the "comedy" in Romantic Comedy, so they play an important role. I appreciate the interaction of this family almost as much as I appreciate Sandra Bullock's over-sized sweaters and the fact she works at a toll booth. By the time Bill Pullman declares his love for her, everyone else, both in the movie and the audience, is already in love with her.

2. Return to Me- I've never been a huge David Duchovny fan, but Minnie Driver is wonderful. The premise of this movie is a heart breaker, literally. But again, it's the comedic relief of the elderly people who hang out at the restaurant that give this movie depth. Aside from their one-liners, they bring wisdom to the movie that Driver and Duchovny are in need of as they navigate what could be some tough waters. Plus, it has Bonnie Hunt who is like the key to success when it comes to Rom Coms. Which brings me to...

3. Jerry Maguire- Don't judge me for liking a movie where Tom Cruise is the star. This movie is so much more than a love story. That's what it ENDS UP being about, but there is so much that happens before that and around that. If anything, it's about a man coming to terms with the dualities that exist within him. The formula isn't obvious, even if it does have a funny kid in it. Getting to the heart of the matter, this movie really captures the awkwardness of liking someone but not loving them yet, but wanting to secure your place with them, but not wanting to commit. The dialogue in the movie is classic, which we all know because it contains some of the most mocked and repeated lines in movie history. My personal favorite being...this one...

4. Roxanne- Look, if you haven't seen this, go watch it now. Based on "Cyrano de Bergerac," Steve Martin and Daryl Hannah are a super odd combination, but the movie just works. This was probably one of my first Romantic Comedy experiences, and I remember being so happy that someone who was less than perfect ended up with the girl! Steve Martin is amazing in this movie. There's a scene where people are making fun of his nose and he joins them. I love that use of humor to shame them and to show his brilliance and confidence.

5. Never Been Kissed-I like to think that I share a connection with Drew Barrymore. We have the same birthday, so there's something to that right? When I saw her in Never Been Kissed, I knew we shared a connection. She pulls off awkward and dorky waaaaay too well not to actually be awkward and dorky in real life. Unfortunately, the movie is guilty of what I consider to be one of the most annoying things about Romantic Comedies...the lack of communication. Most Rom Coms would only last about 15 minutes if just one line of dialogue was added to them to explain whatever misunderstanding launches the rest of the dramatic plot. But this one is just so fun. Michael Vartan is gorgeous, and even adult Josie finds herself giving into the peer pressure of acting a certain way. Plus...it has this line in it about Josie wearing white jeans after labor day, and someone responds, "I don't think you're supposed to wear white jeans after 1983." Boom.

6. The Wedding Singer-Speaking of Drew Barrymore, the best soundtrack to a 90's movie came from this one. When Adam Sandler leaves his over-the-top characters at home, he can actually act, and this movie is so sweet. From his teaching voice lessons, to epitomizing the 80's in all their glory, The Wedding Singer is a classic. I love the transition of these two people as they find themselves drawn together and how they both try to act with integrity in that. But mostly I love how many great lines and references this movie has in it. And don't get me started on the clothes!

7. Forces of Nature-I'm the first to admit that this next one is not a classically great movie. But I love something about it. Maybe it's the free spirit in me. Maybe it's the combination of Ben Affleck and Sandra Bullock (which doesn't even measure to Sandra Bullock and Ryan Reynolds in The Proposal). But it just seems that the stakes are high in this movie or something. And I like the implication of the title, that some things just can't be stopped. And I really like the rain at the end of the movie. I think what I'm trying to say, is that in spite of Affleck's bad comedic timing, and a less than perfect movie with what some people call a bad ending, I like the theme. That the grass might be greener on the other side, but it doesn't mean you have to go live on that grass, you can just water what you have to make it greener. 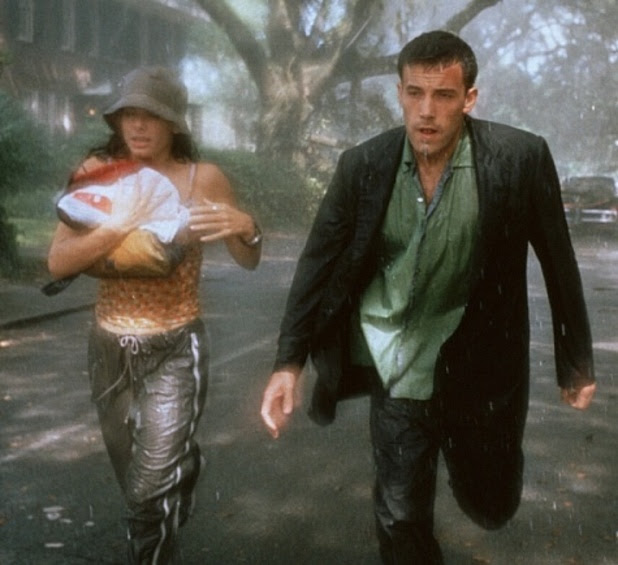 8. Romancing The Stone-Remember when Michael Douglas was considered sexy? And Kathleen Turner, wow! This was one of my very favorite movies for a long time. I felt like it combined Indiana Jones with romance, and I loved it. I loved that she was a writer and he was a rebel. Consequently, I watched the "sequels" to this one, The Jewel of the Nile and arguably, The War of the Roses. There's not really any quality to this, it's just fun!

9.Can't Buy Me Love-Before he was McDreamy, he was Ronald Miller. Ronald. In my opinion, this is the movie that MOST teen/high school Rom Coms are based on these days. From the rise to popularity, the dishonesty behind it, the ridiculous dance at the prom, slow clapping, lunch room fighting, and inevitable shunning, this movie has it all. I like the way it shows Ronald's change from being a nerd to being popular, and how he has to abandon his friends to get there. Of course this leaves him alone, which is where you deserve to be after lying, abandoning friends, and trying to be someone you're not. The ending's good though. It also has Amanda Peterson in it, who really never acted in anything substantial again, even with her adorable dimples.


10. Anything Julia Roberts-Listen...you might not like her lips or her laugh, but I adore her. I think she is pretty close to flawless when it comes to acting. In her real Hollywood life, she has had very few mishaps that have landed her in controversy. She is known for her grace, integrity, and honesty in a career that strives to suck those things from you. And there is really no fighting it...she is the queen of the Romantic Comedy. Don't talk to me about Meg Ryan (honorable mentions, You've Got Mail and Sleepless in Seattle) or Sandra Bullock. And don't make me laugh at you by for mentioning Katherine Heigl. Anne Hathaway is on her way out of this genre, and Kate Hudson has about 50 more movies to do before she catches up with Roberts...not to mention, she needs to work on quality.

From Pretty Woman when we all pretty much fell for her, to Larry Crowne and (almost) EVERYTHING in between, she is my favorite Rom Com actress. My personal favorite is My Best Friend's Wedding because I think she is at her best in that movie. But a close second for me is Runaway Bride. The cast of that movie is so at ease, and it's full of Easter eggs for fans of Roberts and her past movies. Here's a little sampling of JUST her Rom Com listing. It is not extensive NOR does it include her brilliant roles that fall outside the genre. Conspiracy Theory, Stepmom, Pretty Woman, America's Sweethearts,Something To Talk About, Steel Magnolias, Mystic Pizza, Larry Crowne, Mona Lisa Smile, My Best Friend's Wedding, and Notting Hill. JUST TO NAME A FEW. My favorite scenes of her include The Notting Hill "I'm just a girl..." speech. Pretty Woman shopping trip and Pretty Woman "I say who!" speech. Runaway Bride scene with Joan Cusack where she makes the platypus face. And Mona Lisa Smile (which by the way has one of the most amazing casts of any movie ever) scene where she lectures them on the portrayal of women in advertising and contemporary art. (You can find the link at You Tube under "Mona Lisa Smile What For?")  Anyway, there's not much romance or comedy in that one, but you get the point, she's wonderful.


Ok...your turn!
What is your FAVORITE Romantic Comedy and Why?

Email ThisBlogThis!Share to TwitterShare to FacebookShare to Pinterest
Labels: Can't Buy Me Love, Forces of Nature, Jerry Maguire, Julia Roberts, Movies, Never Been Kissed, Return to Me, Romancing The Stone, Romantic Comedies, The Wedding Singer, While You Were Sleeping